New York Fashion Week Is Right Around The Corner!!!

Arrive On Campus In Style - More Fashion Tips For The Fellas!!

Lil Scrappy Pleads with Blacks to Stop Killing Each Other #RealTalk

MOVIE REVIEW: Kick-Ass 2 – This is Not A Comic Book, This is Real Life!

It has been two years since Dave (Aaron Taylor-Johnson) revealed himself as  “Kick-Ass”, the first known superhero. Within those two years Dave hung up his costume since blasting crime boss Frank D’Amico (Mark Strong) out a window with a bazooka. As for Mindy aka “Hit-Girl”(Chloë Grace Moretz), she might have lost her father Damon Macready aka “Big Daddy” (Nicholas Cage), but she never broke the promise she made to him; to never stop protecting the streets. But fighting crime is a lot harder now that Detective Marcus Williams (Morris Chestnut) is Mindy’s legal guardian and is enrolled in high school. But not even that will stop Mindy from breaking her promise to Big Daddy and figures out a plan to hack into the school’s computer and give herself perfect attendance while in reality she cuts school and trains as Hit-Girl. Mindy fears she will fight alone for the rest of her life but Dave decides to pick up his green and yellow costume and re-join Mindy in training. But Mindy couldn’t remain as Hit-Girl for long when Marcus later finds out what Mindy has been up to and has her promise she will retire her alter ego for good.

Dave didn’t expect to start a huge trend when he first became Kick-Ass. More superheroes began walking the streets either by protecting them or just helping out via community service. Now with Hit-Girl retired, Kick-Ass first joins Dr. Gravity (Donald Faison) in fighting crime but that wouldn’t be the last hero either one joins up with. With the funds and help of Colonel Stars and Stripes (Jim Carrey), Kick-Ass and any other “superhero” who wanted to join formed a group called Justice Forever in which they protected the streets together.

But what about Chris D’Amico (Christopher Mintz-Plasse) formerly known as Red Mist? After Kick-Ass killed his father, Chris and his mother moved to Long Island in hopes that Chris can live a normal childhood. But that is not what Chris wanted, he wanted revenge and to kill Kick-Ass himself. Now needing a super villain name (seeing how Red Mist was his super hero name), Chris picks up the name ‘The Mother Fu*ker’.  The Mother Fu*ker who knows about Justice Forever and Kick-Ass’ identity forms his own little group of paid hit men and prepares for one more battle with Kick Ass. 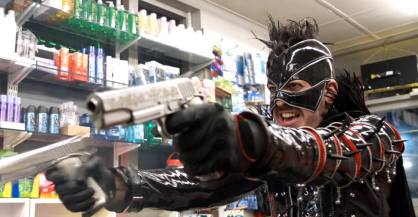 Kick-Ass 2, in my opinion is one of the best blockbusters of the summer season. It gave you that action we love (with more blood than I would have ever expected) and gave you some great laughs as well. Some of the action was highly unbelievable (Example: how people will blow up or how a bullet affected them) but I didn’t care because of how entertained I was throughout the scenes. But the movie did have some flaws…

Director Jeff Wadlow had a big task to handle when it came to meshing Aaron Taylor-Johnson, Chloë Grace Moretz and Jim Carrey all together and I don’t believe he succeeded. First off, this movie should of been entitled Hit-Girl or Kick-Ass 2: Hit-Girl, basically something surrounding Hit-Girl because she is the true star of both films so far – the sequel more than first film. But with that being said you leave the film saying, “I wanted more Hit-Girl.” Maybe this is a direct result of Wadlow fusing the Kick-Ass 2 comic with the spinoff comic Hit-Girl. Majority of the time, we have Hit-Girl as just Mindy who is struggling to become a real teenager instead of the highly trained (and the best trained out of all the superheroes in Kick-Ass 2) Hit-Girl that we enjoy. As for Jim Carrey’s Colonel Stars and Stripes, we aren’t given enough. Majority of Carrey’s scenes can be found on the trailers which sucks because whenever we are given Colonel Stars and Stripes he rocks it.

But as for the rest of the supporting cast – Wadlow nails it especially with Christopher Mintz-Plasse’s Mother Fu*ker.

Overall, Kick-Ass 2 is a great film, especially when you look at the other films the month of August has brought us. You are fully entertained throughout the film from either the action or the comedy and won’t regret spending some cash to see this in theaters. But like Jim Carrey tweeted in June, this film is very violent and would second think bringing your kids along to see this film.

I did Kickass a month b4 Sandy Hook and now in all good conscience I cannot support that level of violence. My apologies to e

Movie Review: This is the End - The Apocalypse Shouldn't Be This Funny
MTV's The Challenge Rivals 2 Review and FULL Episode
MOVIE REVIEW: The Wolverine - Immortality Is Not Always A Good Thing