MOVIE REVIEW: The Family - You Can Take the Family Out the Mob But Not the Mob Out the Family

MOVIE REVIEW: The Family – You Can Take the Family Out the Mob But Not the Mob Out the Family

Giovanni Manzoni (Robert De Niro) is a former Mafia boss who with the help of Agent Stansfield (Tommy Lee Jones) and the Witness Protection Program, have been relocated to a small town in Normandy after snitching on the mob. This isn’t the first time Giovanni, who is now going under the name Fred Blake, has been relocated. “Fred Blake” and his family have been relocated to other places within the United States, Paris and the South of France in order for the Manzoni family to attempt to start over. The reason for constant relocation? Giovanni, his wife Maggie Blake (Michelle Pfeiffer) and their two children Belle (Dianna Agron) and Warren (John D’Leo) cannot resist their old ways.  After all on the first day of living in their new location, Maggie blew up a supermarket, Belle beat up a student with a tennis racket and stole another one’s car and Warren came up with a scheme to ruin a group of student’s plan who jumped him prior.

With all the mischief the Manzoni family gets into, Agent Stansfield always gets them out before the Mafia that Giovanni snitched on finds them. But that is all about to change when Warren writes a saying in the school newspaper that was once said by Mafia boss Don Mimino (Dominic Chianese), “If it is good enough for you, it is good enough for me”. The school newspaper is heavily read in Normandy and ends up finding its way into the States and eventually into Mimino’s cell. Mimino, who is locked up because of Giovanni’s betrayal, has been on the hunt for the Manzoni’s family and could never get his hands on them. Now with the help of the school paper, he has the upper hand on Agent Stansfield and the Manzoni family.

The Family gives us an entertaining new twist on the classic genre of Mafia movies. We are used to Mafia films where we have seen a mob boss rise and fall in their Mafia or characters had to start their life over. Instead The Family explores what happens to a former Mafia family when they have to go undercover. To make it more entertaining, the director Luc Besson throws this family into a small village in France that doesn’t match the Manzoni’s way of living – making them fish out of water.

If the Manzoni family don’t get their way they will make sure that it doesn’t stay that way. In the French countryside, plumbers are considered gods in the sense that they are not many of them and are in high demand. If you get on the wrong side of them your wait will increase and will take up to years to finally be seen. That isn’t okay with Giovanni, if you try to cheat him, he’s going to kill you. And that is a theme that is constantly brought up – locals trying to cheat the American family and each time it doesn’t end well for them. The casting was well done as each member of the Manzoni family added a different element that demonstrates how hard of a change it is to adjust. We have Giovanni who still whacks people when they do him wrong, Maggie who lets her temper get the best of her, Belle, who shares the same temper as her mother, struggles with her identity and her new change of scenery and Warren who looks up to his father as a role model and wants to repair the family name.

The Family  builds up to the Mafia finally catching the Manzoni family after they found out their new location. It builds up the drama through comedy but when the time finally comes for the two to be reunited it is short lived. We also understand that the reason why the Manzoni family was relocated in a small town in Normandy but we are never told why he snitched or what he said. When Giovanni starts writing his memoir and narrates as he types, you get a feeling you are going to be introduce to the back story of the Manzoni’s current situation but is short lived as well.

Overall The Family is an entertaining time and gives a fresh new twist to the Mobster film genre. But with the short lived ending, I wouldn’t recommend this movie to see in theaters.  But I do recommend checking this movie out at one point because you will get an amazing performance from the entire cast.

The Family is based on Tonino Benacquista’s novel Malavita. 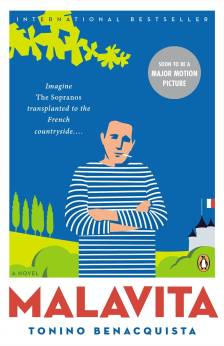 What The Delio?: The 20 Best Drama Movies On Netflix Instant Play
Erica From LVHHATL Talks About Shay, Momma Dee, and Scrappy!
MOVIE REVIEW: Pacific Rim – When You Combine The Matrix With Transformers